What is Amyotrophic Lateral Sclerosis (ALS)? 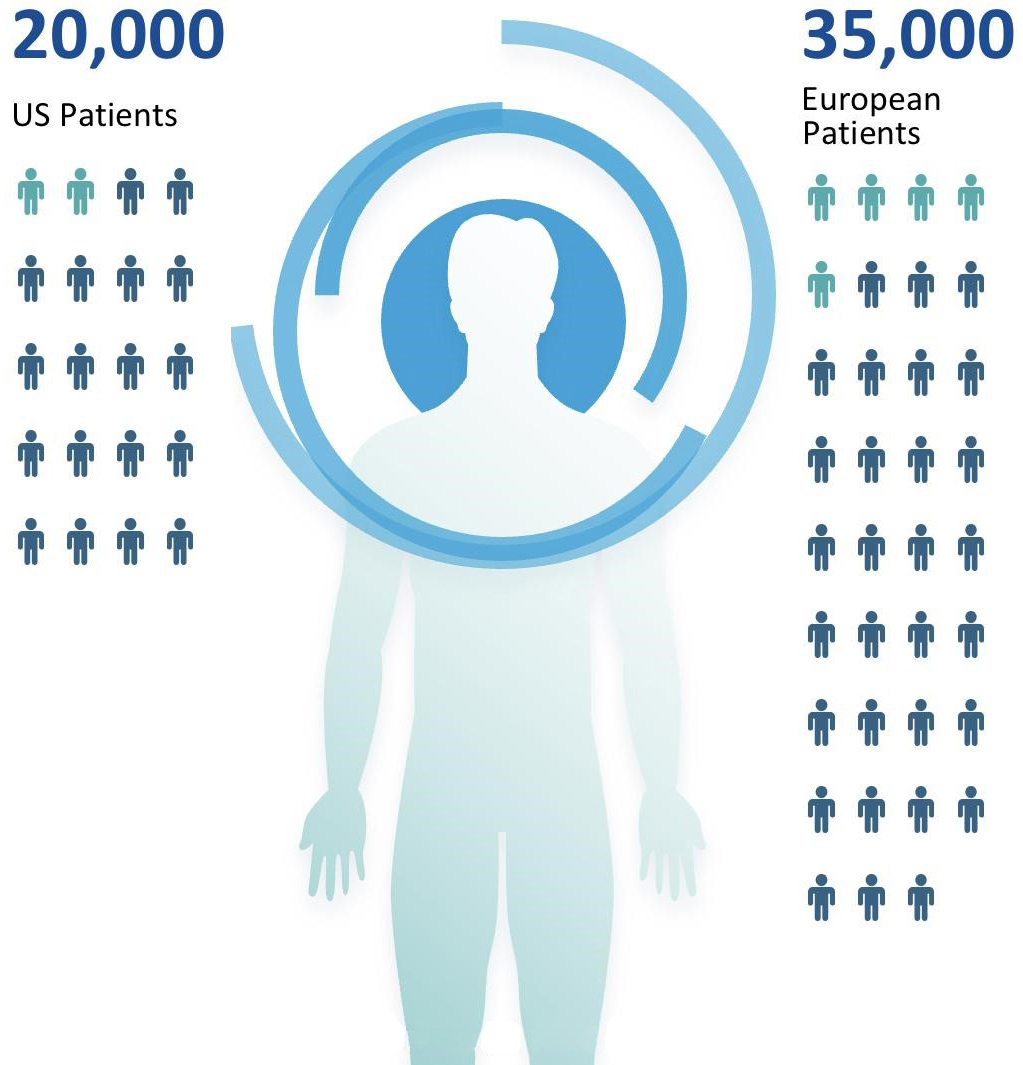 1 Adapted with permission from ALS Association infographic; 1. based on $250,000 estimated annual cost of caring for an ALS patient

of cases are inherited through a mutated gene

of US expenditure on ALS patients

Amyotrophic lateral sclerosis (ALS), also known as motor neuron disease (MND) and Lou Gehrig’s disease, is a devastating neurodegenerative disorder for which we urgently need new therapies. No disease-modifying treatment is available for ALS, while the currently available treatments only marginally influence survival or disability progression. Data from disease model systems and from human biosamples provide strong evidence for a role of redox imbalance, inflammation, mitochondrial dysfunction and altered proteostasis including autophagy and mitophagy, as four key drivers in the pathobiology of ALS. Most therapies targeting individual pathways have failed in the clinic. Major reasons for these trial failures are the heterogenous and multifactorial nature of ALS, and the inability to measure or even demonstrate central nervous system (CNS) target engagement in clinical trials. Compounds which activate the nuclear factor (erythroid-derived 2)-like 2–antioxidant response element (NRF2-ARE) pathway have beneficial effects on all four of these key drivers of neurodegeneration. Also, the additional activation of heat shock factor 1–heat shock element (HSF1-HSE) pathway can further contribute to the therapeutic effects of those compounds. To make headway in ameliorating ALS, we need therapies which target multiple pathways contributing to neuronal injury, and for which robust measures of early efficacy and disease-modifying effects are available. NRF2 and HSF1 activators represent such an opportunity.

NRF2-ARE activation is a powerful new therapeutic strategy for ALS. NRF2 is a transcription factor regulated by the Kelch-like ECH-associated protein 1 (Keap1). The Keap1-NRF2 complex constitutes a cytoplasmic sensor of redox imbalance and electrophilic agents, and it is activated when cellular redox status shifts to an oxidative state. NRF2 pathway activation can also be mediated by small molecule electrophiles which react with Keap1. NRF2 activation manifests pleiotropic downstream effects due to transcriptional activation of genes promoting cytoprotective effects, with the potential to positively impact neuronal survival. These pleiotropic effects of NRF2 activation lead to significant neuroprotective effects and loss of NRF2 enhances neuronal sensitivity to a range of neurotoxic challenges. Attenuation of the NRF2 response has been observed in ALS, Alzheimer’s disease and in aging. In human biosamples, biochemical evidence also indicates that reduced NRF2 activity is a hallmark of ALS. Critical to the approach we are taking here is the fact that this attenuated NRF2 response can be overcome using known small molecule inducers of this biological pathway.

HSF1-HSE activation is another powerful new therapeutic strategy in ALS. HSF1 is a transcription factor regulated by heat shock protein 90 (Hsp90), Hsp70, Hsp40, Hsf1, and TRiC complex in the cytoplasm. Under stresses, HSF1 is derepressed, and then trimerizes and translocates to the nucleus, where it binds to HSE to promote the transcription and translation of downstream genes that enhance neuronal survival and function. The activated genes encode protein chaperones, particularly Hsp70, are also involved in inhibiting the formation and disaggregation of pathological stress granules, as well as clearance of terminally-formed aberrant stress granules via autophagy. The above has been shown to restore dysfunctional nucleocytoplasmic transport, which is a pathomechanism in multiple neurodegenerative diseases including ALS. Hsp70 has been shown to attenuate the formation of pro-inflammatory cytokines via the inhibition of the formation of IκBα phosphorylation, which is upstream of the nuclear factor kappa-light-chain-enhancer of activated B cells (NF-κB) signaling pathway during the symptomatic phase of neurodegenerative diseases.